Artistic Director of the highly acclaimed Woodend Winter Arts Festival, which she formed in 2004, and Director of the baroque ensemble Accademia Arcadia (finalist for 2007 ARIA award in Classical Music), Ogeil is also a harpsichordist, organist, fortepianist, scholar and is the inaugural Director of Duneira, Mt Macedon.

Her academic articles have been published internationally and in 2006 she was awarded a PhD at the University of Newcastle for research involving an exploration of all the sonatas of Domenico Scarlatti, carried out with the assistance of an Australian Postgraduate Research Award.

Ogeil is regularly broadcast on ABC FM and 3MBS FM and has appeared in a Paul Cox movie The Human Touch. Ogeil has recorded on historical keyboards in Portugal, Italy and the United Kingdom, including the first CD recording on the world’s oldest playable piano still in its original form. Released by ABC Classics in 2007 as The Portuguese Scarlatti, this CD and her Trio Sonatas CD have each been featured as CD of the week on ABC Classic FM. She has recorded eleven CDs and ABC Classics has re-released her recording of Bach’s Goldberg Variations in 2010 and again in 2014 as part of the Baroque 100. 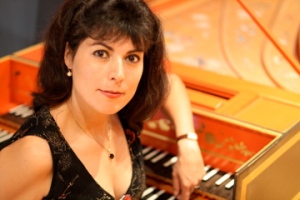 “In Dr. Ogeil I believe you have something of a national treasure. An outstanding performer on the harpsichord, early piano and organ, a consummate chamber musician, a fine recording artist and a dedicated scholar, she is uniquely placed to bring the sounds of one of the most important eras in the history of the piano to Melbourne.”
Prof Emeritus Edward L. Kottick, School of Music, The University of Iowa, Feb 2008

“This is a lovely disc: gorgeous but not overly familiar music played, as it ought to be, with gusto, clarity and good taste … Intonation, phrasing and ornamentation are all beautifully matched, and the rhythmic vitality is a delight.”
Malcolm Tattersal, Music Forum, February-April 2008

“Jacqueline Ogeil brings us not just another recording of Scarlatti sonatas, but a rare peak into the sonorous world of Domenico in Portugal … Particularly beautiful are her interpretations … The delicate sound of the instruments sings under Ogeil’s hands… She plays with conviction, passion, and originality. I found the final Fugue (K.417) to be deeply moving.”
Nancy Lee Harper, European Piano Teachers Association, February 2008

“Ogeil studied Scarlatti’s music for her PhD at University of Newcastle so her playing recorded here on ABC Classics label Antipodes for historically informed performances, is not just beautifully articulated, supple and well informed, but will put Australia and its academic prowess in the international arena.”
Patricia Kelly, The Courier Mail (QLD), Thursday 6 September 2007

“Both the playing and recording are much better than the piano’s previous recorded outings with the BBC. Congratulations! And I know better than most what you were up against. You have drawn from it great variety and vitality.”
Christopher Nobbs (musicologist, piano restorer), London, personal email of 10 January 2008

“With this disc [Goldberg Variations] and with her recent disc of Handel’s Italian cantatas with the Accademia Arcadia, Jacqueline Ogeil seals her reputation as one of Australia’s finest musicians.”
Mark Shepheard, Libretto magazine, February 2005